Our group of 10 left for our Summer Bible Conference in Prescott AZ at 3:30 in the morning on July 4th. This was something I had been planning for a couple of years, even though the couples I originally planned to go couldn’t make it. We had assumed their third child could be babysat, but who could have guessed that there would be two more. Next time!

We traveled 13 hours to Amarillo TX. We made a cool lunch stop in El Reno, Ok at Sid’s restaurant. A family owned and operated hole in the wall that is the real deal. 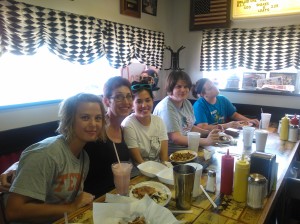 Found Sid’s via Yelp and we were not disappointed.

We made our way to John Robinson’s church in Amarillo where he allowed us to camp out in his Sunday School rooms. They had a barbeque waiting for us and we played some volleyball. Everyone with Molly to watch the fireworks while John and I did a one minute bible study in the neighborhood so he could see the mechanics of it. We then caught up on life at Starbucks until 11 that night. The Robinson’s were in Kitwe, Zambia while we were in Mazabuka, Zambia. We did not know and they did not know that they would be announced to return to Africa at the upcoming conference. John and Molly will be going to Durban, South Africa. Our church did contribute to the festivities with an exploding watermelon, something that is done with many rubber bands until the slowly bulging watermelon bursts. 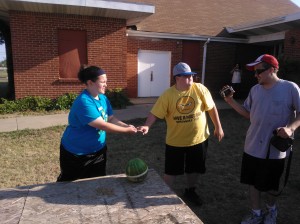 Patiently waiting for the explosion.

Easy breakfast and a little more time with John before we get back onto the road heading for Albuquerque where we will pick up Bonnie who will be flying in. Dennis has requested one stop, the Cadillac Ranch. We make the stop, take some pictures and even do some spray painting.

We picked up Bonnie and headed for Chinle in the Navajo Nation. Switched on the radio to listen to the Navajo speaking disc jockey. We arrived that Friday night, we were planning on camping out but ended up in motel rooms. We went to an outdoor concert that night sponsored by the church. TJ Horta, a pastor from Phoenix was rapping. He and his wife would be announced to go into Detroit during the conference. Pastor Aragon presented the Eggemeyer family with a gift following the concert and took all of our girls out for a A & W root beer treat.

The next morning a guide from the church took the Sparta folks into Canyon de Chelly for a tour. After that tour a family from the church wanted to take us up to Monument Valley, famous for John Wayne movies and now Johnnie Depp movies. Daryl and family drove us up and at the gate we found out that his father lived in Monument Valley. His family could get in for free and she asked him about the rest of us…he said they were family also and they let us all pass. I had as much fun watching Daryl and his family as I did the sights. He is teaching his son, Anthony, to rope by chasing him down and roping him. Our Erriel found a soul mate in his daughter Erriel. His wife Elreena was charming and blessed Joan with a turquois bracelet. 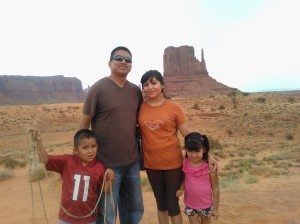 The Sparta Group in Monument Valley 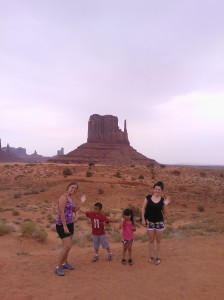 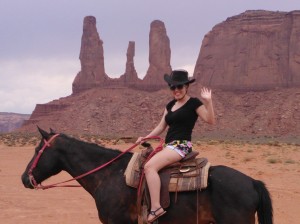 The next Sunday morning I would do a Sunday School talking about “One Minute Bible Studies”. Sunday Schools are always a challenge to get participation and at one point I challenged the Navajo congregation that unless they talked it could be a long silence. Pastor Aragon raised his hand and gently explained to me that Navajos would have no problem out silencing me. I ended up calling on individuals to share their ministry experiences. What a blessing, as I began to realize that this church has not only had great impact on the Navajo nation but they have had ministry expression all over the nation as well as overseas. I would later contemplate about this and realized that because this church had been able to free themselves from the bitterness that accompanied White/Indian relations they were able to not hate white men and thus have opportunity to minister all over the world. I applied this in my mind to the Black community in Sparta. I would then preach my recent Supreme Court Decision sermon. This would be the third time I preached it and I felt like it was a word from heaven. I have added my Seattle experiences to the sermon to add something to it. Artie would preach that night, a real blessing to our folks. We had a special lunch up in a pass over the mountains that separated Chinle and Shiprock. The reason for the special location for the picnic was because Joan had mentioned her desire to get a photo of Shiprock for her geo-caching. Once again Artie and Sandra were more than accommodating.

Geo-Caching Joan with Shiprock in the background.

That night we would be treated to an Indian Taco feast where the Mayor of Chinle gave us a welcome to the Navajo Nation. He has been involved in Navajo politics for 40 years and recently came into the church with a letter to Pastor Aragon explaining his reasons. He said he had seen the effects of all of the government programs set up to help the Navajos and compared that to the real change he has seen in the lives of those Navajos who have become part of the church and their was no comparison as to which one produced real benefits for the Navajo people. When our people testified back in Sparta we would hear the phrase, they treated us like royalty, and they did. We did do one minute bible studies with about 20 of them just before the evening service. We went out in 5 cars and did around 35 of them in just 30 minutes, it was a good time.

The next morning it was on to the Grand Canyon with 3 stops along the Southern Rim and then down to Prescott where we checked into our hotels for the week of conference. It was a great conference with everybody being ministered to in various ways. My Monday night started off with shaking hands with Pastor Mitchell with our grandson, Roman, in my arms. He had that look of: you aren’t going to really be here for conference look. It was a grandbabies week for Joan and I. Billy and Brooke with our two grandchildren, Julia and Roman, would be down for the whole week also. They brought their youth group of 18 kids from the Reno church and stayed in a big fancy house in the pines below Prescott. Pastor Mitchell would let Brooke know that she had made her parents very happy. Pastor Mitchell had collapsed during our January conference while we were all praying for the workers that were being sent out to start churches. His running joke was that they would still be praying if he had not fainted. He was in great spirits and as the 83 year old leader of our fellowship he still is a man who enjoys the ministry and enjoys life. We would have fellowships with Pastor Dave Robinson and the Wickenburg folks as well as the Reno folks and a special lunch with Chuck and Cathy Haynes. They invited all of the Sparta folks as well as the couples from Zambia that I was entertaining. We had a great time. Our week of grandparenting our way through conference was vindicated Friday morning with a sermon about the importance of grandparents speaking into the lives of their actual and spiritual grandchildren.

Joan and Roman at conference

We would start the drive home that night after Friday night’s sermon. We made the trip in 24 hours of straight driving with a few stops. It was a great time and we will probably try to pull it off again in the future. Sunday morning I preached from conference about accomplishing something and the health benefits to the soul as well as how in accomplishing something we become a tree of life to others. I think that is what happened.

Pastor a church in Sparta.
View all posts by hansston →
This entry was posted in A Pastor, Sparta Church, Travel. Bookmark the permalink.